Dhananjay Chatterjee was a guard in a building where a teen-aged girl named Hetal Parekh was found dead in March 1990. He was convicted of having raped and killed her and was hanged on his 39th birthday, August 14, 2004, protesting his innocence until the end. His execution followed a shrill campaign waged by the wife of the then West Bengal chief minister, Buddhadeb Bhattacharya. Chatterjee’s appeals were rejected by the then president APJ Abdul Kalam on the advice of arguably India’s worst home minister, Shivraj Patil, going by historian Ramachandra Guha’s estimation. In a similar situation, his predecessor in Rashtrapati Bhavan, KR Narayanan, had applied his mind wonderfully, as emerges from an anecdote narrated by his secretary, Gopalkrishna Gandhi. Delivering the People’s Union of Civil Liberties’ 35th JP Memorial Lecture in Bangalore on March 23 in 2015 earlier this year, Gandhi described how he had received a call late at night from Chennai regarding the case of a man on death row in Tamil Nadu and how the president had unhesitatingly decided on commuting his sentence. Gandhi went on to speak of the independent and cerebral outlook that India’s sole Dalit president brought to his job. As for Dhananjay Chatterjee’s execution, the People’s Union for Democratic Rights, a four-decades-old New Delhi-based volunteer outfit, put out a statement on July 21, 2015 based on an analysis by two scholars from the Indian Statistical Institute in Kolkata, arguing that the guard was framed.
The analysis by Debashish Sengupta and Prabal Chaudhury, timed to coincide with the Law Commission’s Public Hearing on the death penalty in New Delhi on Saturday, July 11, described what they believe was a botched investigation. They also highlighted inconsistencies in the evidence and pointed to fictitious claims, all aimed, they say, to frame Chatterjee. The two scholars noted that a police witness in court denied having seen Chatterjee at the victim’s flat. The police seizure list was signed by someone who supplied tea to the police and did not turn up in court. The antecedents of some items presented as incriminating evidence, such as a necklace and a watch, were never checked. The trial court failed to question why no murder weapon was recovered and why there was no blood on Chatterjee’s clothes even though there were 21 stab wounds on the victim’s body. While the crime was said to have been committed in a short window between 5:20 pm and 5:50 pm, when Hetal Parekh’s mother was out of the flat, there was a three-hour delay before the police were called – ample time for tampering with the evidence. The Parekh family members’ statements were inconsistent, and the family soon wrapped up its thriving jewellery business and left Kolkata, raising the possibility of an honour killing, the scholars contend. A letter written by the victim’s father alleging that Chatterjee used to harass his daughter, which was used by the police to establish a motive, seems to have been written after the crime, the scholars say. Chatterjee had spent 14 years in jail before he was hanged. He was thus punished twice for a crime he likely did not commit, going by the Kolkata scholars’ analysis, for the mere fault of being too poor to engage a competent lawyer. 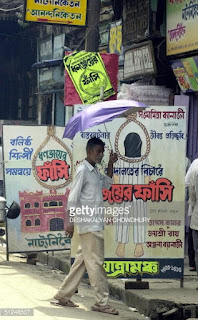 Dhananjay admits to murder, but not rape

Dhananjay Chatterjee's diary should make interesting reading. For one, it is an attempt to get under the skin of crime by a criminal waiting to be hanged. And, two, it insists that he did not rape Hetal Parekh after she came back home from a history examination. Murder, yes, but rape, no way. This January, when the government had pulled itself up to settle the case once and for all, that a jail official asked him to maintain a diary. A pencil and some note-pads were given to him but Chatterjee waited for June to really immerse himself in the diarist's job.
The product might just surprise everyone, feels prisons officials who are keeping a close tab on Chatterjee. The diary had the usual autobiographical inputs but, somewhere down the line, changed its tone. Somebody told Dhananjoy that he must analyse the reasons behind the gory murders taking place daily. "Why should you limit yourself to your life?" the officials supposedly suggested.
Chatterjee agreed. He was always an avid reader of newspapers and kept a watch on the the things around him. "This was how it started," a prisons department official added. Officials still do not know Chatterjee's analysis of crime and criminals but say that Dhananjay is insisting, even in his "autobiographical" diary, that he did not rape Hetal Parekh.
Little that they have been allowed into some of the pages, they believe that Chatterjee is only admitting to the murder. Chatterjee has also turned "religious" with a vengeance, say officials. Always "apparently god-fearing", he is now an avid reader of the Gita, a copy of which was given to him as the country was debating whether he should be hanged for what he did 14 years ago.

Dhananjoy Chatterjee, the rapist and killer of 14-year-old schoolgirl Hetal Parekh, was hanged to death today at Alipore Central Jail sharp at 4-30 in the morning, ending a prolonged chapter of legal battle over his crime and punishment, his life and death. It also ended the continuing hopes, anxieties and agonies of Dhananjoy’s parents, wife and other relatives at their remote Kuldihi village home in Bankura, about 200 km from here.
Dhananjoy was subsequently cremated at the Keoratala burning ghat in Kalighat, south Kolkata under heavy police escort. None of his family members was present either at the Alipore jail or the Keoratala burning ghat.
Dhananjoy’s last wishes of donating his eyes and kidneys for the cause of humanity, however, could not be fulfilled as “no objection” to this act, had not been obtained at the last moment from his family, the IG (Prison), Mr Jaidev Chakraborty regretted. He said Dhananjoy was perfectly in good spirits and there was no resistance from his side when he had been brought to the gallows and put on the deck for hanging. He kept silent all through as if he had been reconciled with the situation. However, at the penultimate moment, he became a bit philosophical and was heard saying, “Oh God, let there be good to all,’’ the IG said describing Dhananjoy’s last moments.
Dhananjoy had a sound sleep last night after he had been administered a heavy dose of sleeping injection. He had his supper with roti, fish curry and vegetables. At noon during lunch he had been served with rice, fish, fried vegetables and dahi as desired by him. Throughout the day till late evening, Dhananjoy listened to Anup Jalota’s bhajans and Manna Dey’s songs on a tape-recorder which the jail authorities had arranged for him as he wished. But most of the time, he maintained a deep silence. He wanted to write something to his parents and wife on the postcards supplied to him, but he could not complete his writing. The hangman, Nata Mallick, declared soon after the hanging that it was his last act as hangman. Eightyfour-year-old Mallick, who had so far acted as hangman in 25 cases since Independence, will now start a new livelihood by selling puja items on the streets near a Kali temple.
Dhananjoy did not resist at the time of being hanged, but some human rights organisations, including the APDR, brought out a protest march from South Kolkata to Alipore Central Jail last night, demanding the suspension of his death penalty. On the other hand, teachers and students of Well & Goldsmith School, of which Hetal was a student, today held a prayer meeting inside the school campus in the memory of Hetal as well as Dhananjoy. At the remote village home in Bankura, Dhananjoy’s parents and other family members spent silent hours, refusing to meet and talk to outsiders.

Compiled
AB
Posted by Aditi at 9:28 AM No comments: